Reviewed by ACE (see below) 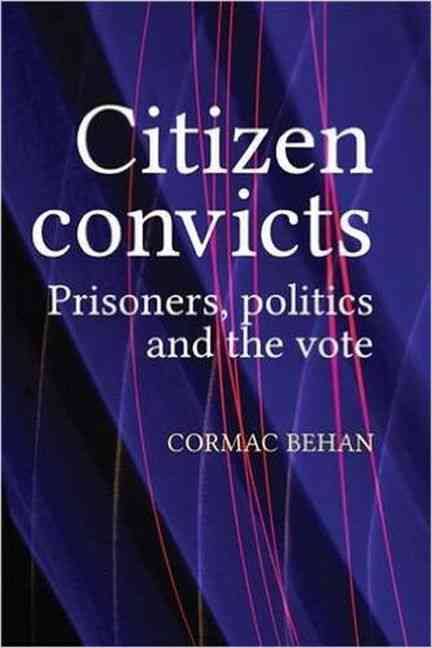 With Citizen Convicts, Cormac Behan offers a case study of voting rights for individuals incarcerated in Ireland, and more broadly makes a significant contribution to the consideration of the legal and civil status of incarcerated individuals there and around the world.  These are issues of particular importance to the authors of this review, a group of sixteen men imprisoned in the maximum security Oregon State Penitentiary in the United States, and ten individuals currently or formerly involved in higher education at the University of Oregon and Chemeketa Community College (students and faculty) who work with them.  Together this group forms ACE (Another Chance at Education), a steering committee for the University of Oregon Prison Education Committee’s educational efforts within the prison, and its participants in the national Inside-Out Prison Education Exchange Program, which brings together incarcerated and campus-based students for college classes within penal settings.  Behan’s specific interest in the question of electoral participation by those behind bars, and his examination of the nature of civic participation – or the lack thereof – by those inside, is of particular relevance to ACE members.  This jointly written review is a reflection of our reading of the text and of our experience in resisting the civil death, isolation, and disempowerment that is characteristic of mass incarceration in the United States.

Citizen Convicts draws upon Behan’s field research and earlier writings and is situated in a global context in which nations approach crime and incarceration with a broad range of carceral models and philosophical starting points.  Earlier work, such as Manza, Brooks, and Uggen’s “Public Attitudes Toward Felon Disenfranchisement in the US,” finds little evidence for the general assumption that the public supports permanent electoral disenfranchisement for ex-felons. Behan’s examination of the likelihood of voting by those currently and formerly incarcerated articulates with Gerber et al.’s study of a large sample size from Pennsylvania and Connecticut in “Does Incarceration Reduce Voting?”  A number of studies have addressed the impact that disenfranchisement has on individuals and their communities, such as Miller and Sillane’s “Civil Death: An Examination of Ex-Felon Disenfranchisement and Reintegration,” for which the authors conducted interviews to explore the relationship between disenfranchisement and the broader range of social exclusion that ex-felons experience, and Anderson’s “Prisoners, Citizenship, and the Public Sphere,” which also discusses civil death and the stigma of criminal conviction. Locked Out, by Manza and Uggen, explores these concepts from the standpoint of political theory.  In “Taking Citizenship Seriously” David Faulkner argues that civilized society requires mutuality in respect and responsibility, a shared sense of citizenship, and the equal value of all people, a point that Behan raises and that we will return to below.   Citizen Convicts and this broader literature engage the fundamental nature of democracy and the undermining of principles that develop due to the disenfranchising structures of the criminal justice system.

In the second half of the book, Behan sharpens his focus to examine prisoner voting and civic engagement, and what this indicates about incarceration and the broader Irish democracy. In Chapter 4, “Voting and Political Engagement,” he discusses a 2007-2008 voter survey conducted in fourteen Irish prisons, which found that there were generally low levels of voter participation.  Long-term prisoners were more likely to vote, and reasons that people did not vote involved low levels of trust in the system, high prison turnover, and logistical challenges. In Chapter 5, Behan returns to this same question, but through qualitative interviews with fifty Irish prisoners, and concludes that in order to develop prisoners’ political engagement, the prisoner must be able to meaningfully participate in the electoral process. Chapter 6, “Civic Engagement and Community Participation,” introduces links between social capital and active citizenship. Behan determines that participation in supported activities in prison like education services, volunteering, and self-improvement courses is not true civic engagement because participation is largely motivated by personal concerns and does not increase social capital, produce change, or create community.  Instead, Behan argues that participation serves to create compliant prisoners, rather than active citizens.  In the final chapter, “Imprisonment and Citizenship,” Behan makes the case that enfranchisement needs to be reconceptualized as more than just allowing prisoners the right to vote, but rather as part of a process of engaging and empowering incarcerated citizens to a greater degree.

Strengths of the volume

Behan examines an impressive amount of recent history, in Ireland and globally, to paint a picture of felon disenfranchisement. He also begins the book with a thoughtful and thorough examination of the arguments for and against prisoner enfranchisement, which provides helpful context for the importance of his research. In laying out his case study, he skillfully combines quantitative data with in-depth interviews to reveal some of the collateral consequences of incarceration in the sphere of political participation, even after prisoners were enfranchised in Ireland. The inclusion of interviews brings the voices of prisoners into the study, which is of course an important component in a study such as this one. Behan’s attention to the more informal areas of civic engagement also adds depth to the text by exploring modes of engagement beyond voting.  He also provides a useful sketch of parallel issues and implications in the context of the United States, and that section will resonate powerfully with those familiar with the breadth and depth of the incarceration crisis there that dwarfs carceral systems in the rest of the world.

We would have liked for Behan to address the intersectionalities of race, gender, and other identities, and the ways that inequalities in society at large are also applicable in prisons and reinforce and reflect unequal control over groups of disempowered people.  Political disenfranchisement is only one prong of this issue, and there is undoubtedly overlap in relation to those who are incarcerated.  Further research could more firmly examine other elements of this complex issue, yielding a more robust theoretical contribution.  Additional dimensions of the carceral experience are evident in Behan’s 2007 article “Context, Creativity, and Critical Reflection: Education in Correctional Institutions,” which provides valuable insight on the possibility of humanization and transformation for those who have been confined at a remove from society.

In Citizen Convicts Behan focused primarily on the agency or lack thereof involved in prisoners being able to vote in the Irish system.  A less developed part of his premise involves the structural issues at play in marginalizing and otherwise restricting felons’ ability to vote, possibly due to the specificities of the Irish context.  We felt that this part of the argument could be more developed and also could include more parallels to other Western systems that are more complex than the Irish case that Behan explores.  Behan’s contention that prisoner participation is a self-serving act, and thus not reflective of true citizenship, doesn’t jibe with our experience, and is belied by the notable cases of “famous” prisoners, among them Nelson Mandela, Albie Sachs, Mumia Abu-Jamal, and Malcolm X, and by the lived experience of many less noted individuals.  Prison is something of a balancing act, and to engage in a “self-serving” activity does not a priori negate or obscure the many positive facets of self-development, accumulation of social capital, and skill attainment that can serve people (and society) as they do time, and afterwards.

A logical next step is to extend the focus of this research to different geographical and political areas and to populations serving longer sentences. A longitudinal study showing the impacts of release on civic re-engagement could bolster or clarify Behan’s conclusions. If, as Behan finds, access to civic activities and enfranchisement does not directly result in active civic participation in Ireland, future research should explore the methods utilized by individuals and groups who do successfully foster social engagement inside institutions. Further examination of the impacts of incarceration on gerrymandering and elections is also needed, both in terms of electoral impact and the ripple effect of potential leaders in underprivileged areas being removed from civic life.

Beyond this, we argue for an examination of existing civic organizations that are led by prisoners and the formerly incarcerated. What allows these individuals to be civically engaged? What is their impact at various levels of their social engagement on other inmates, the functioning of the prison, and in relationship to society as a whole? What lessons can be learned through centering the experiences of incarcerated individuals and expanding these lessons to support new paradigms of criminal justice?

Cormac Behan has made an important contribution to the issue of prisoner disenfranchisement, which is part of a groundswell of interest in this specific issue, and problems of incarceration broadly writ. His study of the enfranchisement of Irish prisoners is both insightful and engaging. Although the case explored is limited in scope, the book provides a framework for understanding and advocating for the potential and power of enfranchisement for all marginalized groups.  We are eager to see this conversation move forward, and to real movement in terms of prisoner enfranchisement at the ballot box and in many other areas of civic life.

Correspondence can be directed to Shaul Cohen, Director of the Prison Education Program for the University of Oregon, who is an ACE member (scohen@uoregon.edu).