The new year has brought a crop of great new – and very different – papers (many of which are open access) that the CGWG wanted to bring to the attention of carceral geographers and others interested in scholarship of carceral spaces. Happy reading!

First, the whole of Stuckness and Confinement: Reflections on Life in Ghettos, Camps and Prisons , 2019’s first Issue of Ethnos, is well worth a read. In their Introduction: On Stuckness and Sites of Confinement, Andrew Jefferson, Simon Turner and Steffen Jensen make clear the appeal of this special issue to carceral geographers, as they develop “a theoretical argument around the interrelations of space and time in sites of confinement by exploring the relationships between ghettos, camps, places of detention, prisons and the like with a focus on those people who are confined, encamped, imprisoned, detained, stuck, or forcibly removed and who are doing their utmost to cope or escape”. They elegantly navigate the diverse disciplinary and interdisciplinary understandings of and interests in confinement, and their own approach resonates with work in carceral geography, which they note is “concerned with multiple sites considering specifically the analytical entwining of imprisonment and migrant detention and with the subjective experiences of confinement”.

First, looking at secure forensic psychiatric units, Paula Reavey, Steven D Brown, Ava Kanyeredzi, Laura McGrath and Ian M. Tucker’s paper Agents and spectres: Life-space on a medium secure forensic psychiatric unit just out in Social Science & Medicine, examines how forensic psychiatric environments contribute to the shaping of recovery, by examining key features such as social interactions and agency. Drawing connections between the design of forensic psychiatric spaces and prisons, they use a concept of life space to explore the idea that occupants of these spaces “engage with the built environment in terms of it how shapes relationality”. They note that “markers of detention, such as locked door and high walls, may not necessarily act as the limits of psychological space”, if relationships to others can be maintained through porous boundaries, and that “freedom of movement…, such as the use of outside spaces and communal areas, might well diminish rather than expand a sense of agency” if relational possibilities are not enhanced. They argue that the built environment “should… be explored from the perspective of the relationally defined life space of the patient, rather than in terms of its spatial affordances only”.

Thirdly, drawing on literary representations of the prison, Anna Kędra-Kardela and Aleksandra Kędzierska have published a fascinating paper in Roczniki Humanistyczne, “From the Profane to the Sacred: Prison-Space Transformations in G.G. Byron’s “The Prisoner of Chillon” and O. Wilde’s “The Ballad of Reading Gaol”” in which they use the concept of ‘story space’ to argue that the changing perception of space in these poems reflects a spiritual transformation for their protagonists. In the first poem, they argue, the experience of confinement leads the protagonist to the acceptance of prison life to the point of the dungeon becoming “a second home”, whereas in the second, incarceration has a transformative function, culminating in spiritual awakening. As a result, prison “becomes a space of prayer, turning thereby from the profane into the sacred”.

And finally, the prison system of California feels familiar to carceral geographers, following the seminal work of Ruth Wilson Gilmore, but in California’s First Mass Incarceration System: Franciscan Missions, California Indians, and Penal Servitude, 1769–1836, published in Pacific Historical Review, Benjamin Madley offers a perspective which will be new to many. Arguing that California’s missions came to resemble a mass incarceration system, he examined the “changing policies of recruitment, spatial confinement, regimentation, surveillance, physical restraint, and corporal punishment as well as California Indian resistance” to trace the ways in which missions and their military allies deployed carceral practices. He argues persuasively that “colonial-era carceral systems may have contributed to the evolution of local penal institutions as well as the long history of incarceration in the United States as a whole”.

Taken together, these diverse and intriguing papers offer much to reflect upon for carceral geographers and others interested in the theorisation of confinement, the development and design of carceral systems and institutions, and their lived experience. Looking forward to much more fascinating work like this in 2019! 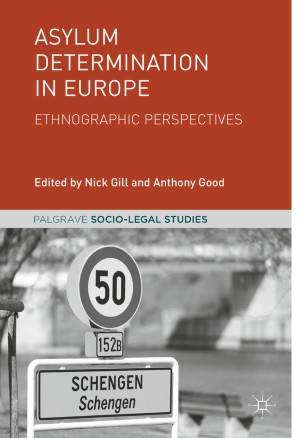 Carceral geographers and other scholars of migration and asylum may be interested to hear about a new open access book entitled ‘Asylum Determination in Europe – Ethnographic Perspectives’ and edited by Nick Gill and Anthony Good, just published in the Palgrave Macmillan socio-legal studies book series.

Drawing on research material from ten European countries, Asylum Determination in Europe: Ethnographic Perspectives brings together a range of detailed accounts of the legal and bureaucratic processes by which asylum claims are decided. The book includes a legal overview of European asylum determination procedures, followed by sections on the diverse actors involved, the means by which they communicate, and the ways in which they make life and death decisions on a daily basis. It offers a contextually rich account that moves beyond doctrinal law to uncover the gaps and variances between formal policy and legislation, and law as actually practiced.

The contributors employ a variety of disciplinary perspectives – sociological, anthropological, geographical and linguistic – but are united in their use of an ethnographic methodological approach. Through this lens, the book captures the confusion, improvisation, inconsistency, complexity and emotional turmoil inherent to the process of claiming asylum in Europe.

“It’s All About Naming Things Right”: The Paradox of Web Truths in the Belgian Asylum-Seeking Procedure (html) (pdf) Massimiliano Spotti

Becoming a Decision-Maker, or: “Don’t Turn Your Heart into a Den of Thieves and Murderers” (html) (pdf) Stephanie Schneider

There are three live calls for papers for prospective sessions sponsored by the Carceral Geography Working Group of the RGS-IBG:

Details for each are below – submit your papers now!

The carceral offshore: unpacking geographies of detriment, intent and spatiality at sea

In examining geographies of trouble/geographies of hope at this year’s conference, it would be difficult for the seas and oceans not to come to mind. With recent, and also more longstanding, attention being drawn to both environmental and socio-cultural and political crisis (and so-called ‘crisis’) offshore (from threats to more-than-human ocean biodiversity and the perils of plastics, to the devastating human dimensions of oceanic migration and offshore detention) this session seeks to pay attention to the ways in which ‘carceral conditions’ (Moran, Turner and Schliehe, 2017) can be further unpacked at sea; and how in turn the sea becomes a space for further conceptualising the carceral.

This session invites papers to explore a myriad of issues that connect up carcerality (broadly encapsulated by conditions of detriment, intent and spatiality, see Moran, Turner and Schliehe, 2017) and the seas (also broadly understood as relational, three-dimensional, multi-state and more-than-wet, see Peters and Steinberg 2019). Papers may be historical or contemporary in focus, empirically driven or conceptually led.

Themes could include but are not limited to:

If you would be interested in participating, please get in touch and send abstracts of no more 200 words to Kimberley Peters (kimberley.peters@liverpool.ac.uk) and Jennifer Turner (jennifer.turner@liverpool.ac.uk) by 8th February 2019.

Carceral Archipelagos of trouble and hope

Ever since the establishment of carceral institutions, their legitimate existence has been questioned. In recent years, the carceral archipelago that was first described by Foucault (1975/1991: 297) as a series of institutions that operate with a punitive model and are built on surveillance and discipline, has increasingly included spaces beyond the prison. In this session, we want to explore this archipelago further by asking how far we can venture from the enclosed institutions and still identify the carceral (Moran et al 2017). Playing with this year’s theme we want to particularly focus on trouble and the many troubles that exist in the carceral sphere, as well as hope. Hope might be more elusive than trouble; however, the two are not binaries but rather co-exist and intertwine in carceral spaces. In fact, trouble can produce hope and hope can be troubling to some. We invite submissions that explore the reach of the carceral, e.g. with regards to electronic monitoring and digital developments; but also pay particular attention the spatial in carceral geography and how people not just do time, but also ‘do space’ (Philo 2018). We would like to explore the carceral archipelago and how this fits in with what has been described as societies of control (Deleuze 1992). We invite papers from all disciplinary backgrounds that seek to engage with, but are not limited to, the following topics and areas:

• The various roles of trouble in carceral environments
• The role of punishment in defining the carceral
• More dispersed forms of carceral interventions like electronic monitoring, community sentences and other interventions
• The role of the digital in carceral archipelagos
• Experiences of hope in carceral space
• Issues of legitimacy and questions of abolition
• Normalisation the strive towards reducing boundaries
• Carceral landscapes and the design of hope and/or trouble
• Carceral practices beyond the prison
• Disruptive practices, resistance and questions of citizenship

Please send abstracts of max 200 words, giving names, institutional affiliation and contact details for authors/presenters, to Anna Schliehe (aks79@cam.ac.uk) by no later than Friday the 8th of February 2019.

The politics of hope within systems of border control: Troubled subjects, materials and temporalities

The contemporary landscape of border control is not widely considered to be hopeful. Profit margins and a political rhetoric of ‘secure borders’ are valued more than life lived in fullness. The UK’s hostile environment policies, the measures put in place by ‘Fortress Europe’, ‘Brexit’ and anxieties of settled status, escalating family detention and Trump’s border wall are but a few examples of increasing hostility to migrants. Simply put, things are getting worse.

And yet hope remains. The politics of migration control can also be characterised as a struggle for/over hope. We encounter hopeful actions in those moving to find family, escape war, find work and in aims for a better life. We find them in the activists and charities working to kindle hope within these systems. Yet we also see hope in the policy strategies to deter ‘hopeful’ migrants, to reduce incentives and to ‘increase border security’. What then, does it mean to talk of ‘hope’ in the context of such increasingly pervasive, hostile and deadly systems of border control? What forms of politics does a focus upon hope open up, and what does it risk precluding? And what might it mean to “hope with teeth” (Mieville 2018)?

The aim for border scholars and activists, however, cannot be to simply engender a sense of hopefulness in the face of such strategies. In this session we therefore seek to further unpack the politics of hope in the context of borders and immigration control by recognising that hope is not necessarily positive, nor is it inherently progressive. We trouble the potentially dangerous simplicity of the ‘hopeful migrant subject’, focusing instead on the multiple forms of hopeful, incoherent subjectivities that are emerging within systems of border control. We also seek to investigate the power of objects and things in shaping the forms and intensities of hope or despair. Furthermore, what temporalities of hope emerge in the context of border control?

We welcome papers and submissions in non-traditional formats (for example video or visual submissions) that explore themes including but not limited to:

Please send abstracts of 200 words to Sarah Hughes (s.m.hughes@durham.ac.uk) and Daniel Fisher (d.x.fisher@exeter.ac.uk) by midnight on the 1st February 2019.

2019 brings our first ever call for carceral geography papers for a dedicated session at the German Geography conference/Deutscher Kongress für Geographie 2019, to be held at Christian-Albrechts-Universität in Kiel, Germany, 25-30 September 2019.

English speakers are welcome. Any questions can be directed to Anna Schliehe – aks79@cam.ac.uk

[English translation: German-speaking research in geography has very rarely engaged with questions around incarceration and punishment. This session aims to discuss carceral geography and geographies of closed space.]

Papers should be submitted via this portal: https://www.con-gressa.de/dkg2019/ by the deadline of 25 January 2019