The Vera Institute of Justice will host a research symposium on incarceration on Thursday and Friday October 25 and 26, 2018 in New York, US.

The call for papers is available now. Submissions are due May 8, 2018.

All documents associated with the call for papers can be downloaded by using the links at the bottom of this page, or as a zipfile here.

Photo credit: Jack Norton. Huerfano County Correctional Facility, built in 1997 and operated as a private prison by Corrections Corporation of America. Closed in 2010. (From https://vera-institute.github.io/In-Our-Backyards-Symposium/)

The unprecedented scale of incarceration in the United States has many political, economic, and social effects. The research symposium explores changes in the carceral landscape and their impacts on American society. Submissions are invited from advanced graduate students, faculty, independent or policy researchers. The organisers expect that a number of papers responsive to this call will provide new insights on the burden of high rates of incarceration, the health, social, and economic consequences for individuals and communities, and insight into emerging policy issues and problems. Papers are asked to engage with the data that is available, but not all papers need to be quantitative or empirical in nature. Submissions from across the social sciences and humanities, economics and data science are welcome.

Submissions should include an abstract of 150-500 words and a brief biographical statement and CV. Please submit all materials by May 8, 2018.

For more information about the In Our Backyards project visit: https://www.vera.org/projects/in-our-backyards

The latest in the Carceral Geography Working Group’s Book Review series has just been published. Cheryl McGeachen of the University of Glasgow reviews Carceral Spatiality: Dialogues between Geography and Criminology, edited by Dominique Moran and Anna K Schliehe, and published in 2017 by Palgrave Macmillan as one of their Palgrave Studies in Prisons and Penology.

Carceral Spatiality originated in a 2014 session at the RGS-IBG Annual Conference in London, addressing the conference theme of co-production. It developed to include chapters (from Lorraine ven Blerk; Caitlin Gormley; Anna Schliehe; David Scheer and Colin Lorne; Jennifer Turner; Rebecca Foster; Clemens Bernhardt, Bettina van Hoven and Paulus Huigen; Sarah Armstrong and Andrew Jefferson), many of which started to take shape in conversations initiated at the conference itself.

Cheryl McGeachan finds that the collection ‘showcases a range of critical conversations across geographical and criminological work that seek to simultaneously open up and break down ‘the carceral’ in innovative, challenging and, at times, controversial ways.’

Read her review in full here.

The latest in the Carceral Geography Working Group book review series is now online. Following hot on the heels of ACE Collective’s review of Cormac Behan’s Citizen Convicts, and demonstrating the sheer diversity of interests within carceral geography, Carrie Crockett provides a review of Sarah Badcock’s A Prison Without Walls? Eastern Siberian Exile in the Last Years of Tsarism.

To suggest a book to be reviewed for the CGWG series, email d.moran@bham.ac.uk 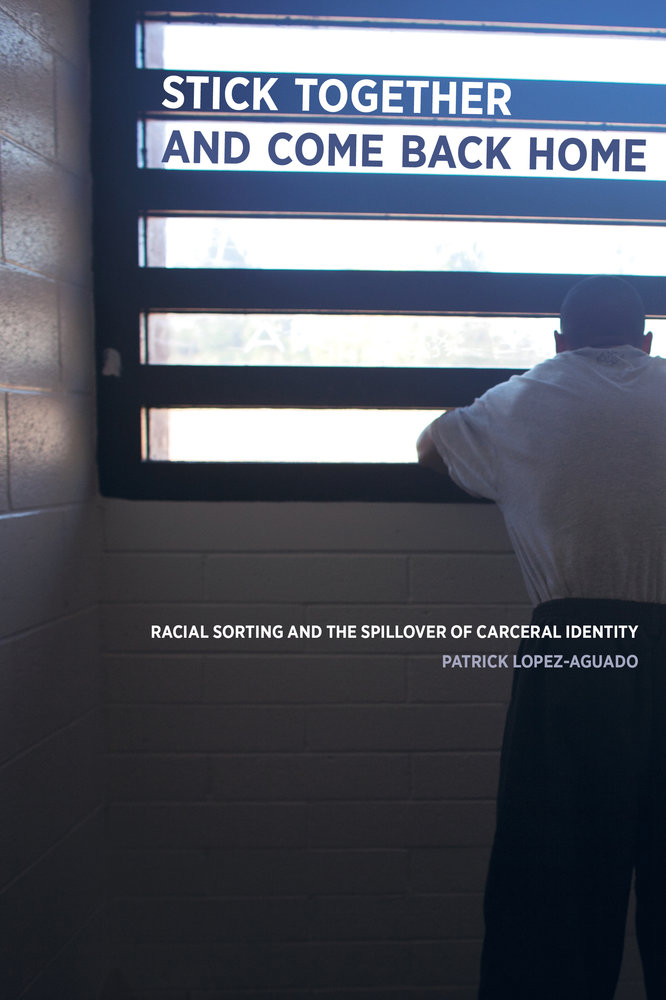 The Carceral Geography Working Group invites prospective reviewers for its Book Review series, for ‘Stick Together and Come Back Home: Racial Sorting and the Spillover of Carceral Identity‘ by Patrick Lopez-Aguado, published in Jan 2018 by University of California Press.

In Stick Together and Come Back Home, Patrick Lopez-Aguado (Assistant Professor of Sociology at Santa Clara University) examines how what happens inside a prison affects what happens outside of it. Following the experiences of seventy youth and adults as they navigate juvenile justice and penal facilities before finally going back home, he outlines how institutional authorities structure a “carceral social order” that racially and geographically divides criminalized populations into gang-associated affiliations. These affiliations come to shape one’s exposure to both violence and criminal labeling, and as they spill over the institutional walls they establish how these unfold in high-incarceration neighbourhoods as well, revealing the insidious set of consequences that mass incarceration holds for poor communities of colour.

Prospective reviewers are invited to email d.moran@bham.ac.uk to organise delivery of a complimentary copy of the book.

Reviews should be c1000 words in length, delivered within 2 months of receipt of the book, and should specifically consider the work in relation to carceral geography and geographical conceptualisations of confinement. Reviews will be published on the www.carceralgeography.com website.

The education booklet Incarceration, Migration and Indigenous Sovereignty: Thoughts on Existence and Resistance in Racist Times has recently been published online.

This booklet responds to the current and ongoing histories of the incarceration of Indigenous peoples, migrants, and communities of colour. One of its key aims is to think about how prisons and their institutional operations are not marginal to everyday spaces, social relations, and politics. Rather the complex set of practices around policing, detaining, and building and maintaining prisons and detention centres are intimately connected to the way we understand space and place, how we understand ourselves and our families in relation to categories of criminal or innocent, and whether we feel secure or at home in the country we reside.

The Space, Race, Bodies research collective has limited funding available for print copies of the booklet. If your organisation would like copies, please email: space.race.bodies@otago.ac.nz

Carceral geographers working on notions of the porosity of the prison boundary, embodiment, (im)mobility, and issues of extended surveillance and control beyond the prison (especially re electronic tagging and/or disclosure), may be interested to offer views to the Scottish Government.

Prior to considering the Scottish Government’s ‘Management of Offenders Bill’, the Justice Committee is launching a call for evidence.

According to the call: ‘The Bill seeks to enable greater use of electronic tagging, reduces the time before a conviction is ‘spent’ for the purposes of disclosure, and alters the makeup of Parole Boards. The changes proposed to tagging could lead to offenders wearing tags fitted with more advanced GPS location technology. Ministers also foresee a point where tags could be used to detect alcohol or drugs in an offender’s system. The Bill would enable these and other measures in future. Elsewhere, the Bill reforms the law on disclosing past offences to others, such as potential employers. The overall direction of travel is towards reducing the requirement to disclose by lowering the time limits before convictions become “spent”. For example the disclosure period for a prison sentence of between 1 and 2 years falls from 10 to 3 years. So-called “higher level” disclosure, affecting sensitive areas of employment, is not affected by the Bill. The Scottish Government’s stated aims are to have more focus on crime prevention, rehabilitation, and support for victims.’

The call for views is open until Friday 20 April. Further details are available here.

A new book is available for review for the Carceral Geography Working Group Book Review series.

The Russian Federation has one of the largest prison populations in the world. Women in particular are profoundly affected by the imprisonment of a family member. ‘Waiting at the Prison Gate’ details the experiences of these women-be they wives, mothers, girlfriends, daughters-who, as relatives of Russia’s three-quarters of a million prisoners, are the “invisible victims” of the country’s harsh penal policy. This book covers the workings of criminal sub-cultures; societal attitudes to parenthood, marriage and marital fidelity; young women’s quests for a husband; nostalgia for the Soviet period; state strategies towards dealing with political opponents; and the social construction of gender roles in twenty-first century Russia.

To review this book for the CGWG, please email d.moran@bham.ac.uk. Reviews should be c1000 words in length, delivered within 2 months of receipt of the book, and should specifically consider the work in relation to carceral geography and geographical conceptualisations of confinement. Reviews will be published on the www.carceralgeography.com website. 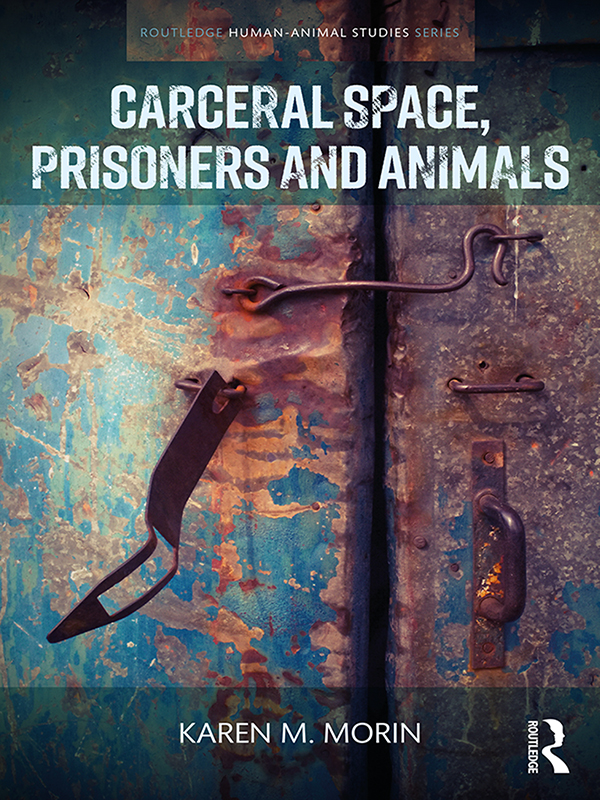 Karen Morin has published a thought-provoking new book – Carceral Space, Prisoners and Animals. In this book. she explores resonances across human and nonhuman carceral geographies, proposing an analysis of the carceral from a broader vantage point than has yet been done, and developing a ‘trans-species carceral geography’ that includes spaces of nonhuman captivity, confinement and enclosure alongside that of the human. The linkages across prisoner and animal carcerality that are placed into conversation draw from a number of institutional domains, based on their form, operation and effect.

This book is the latest product of Karen’s thinking on this topic – she published earlier ideas in a paper in Antipode entitled “Carceral Space: Prisoners and Animals“, accompanied by a superb video abstract. She was the driving force behind the Conceptualising a Trans-Species Carceral Geography session at the Nordic Geographers conference in Stockholm in 2017. But with this new book she has now firmly established trans-species carceral geography, drawing attention to forms of violence that span species boundaries.

There is a 20% publisher’s discount available for Carceral Space, Prisoners and Animals. At the check out at http://www.routledge.com, enter the code FLR40. [Note that this offer cannot be used in conjunction with any other offer, and only applies to books purchased directly via the Routledge website]

If you would like to review this book for the Carceral Geography Working Group Book Review series (and receive a complimentary copy), please email d.moran@bham.ac.uk

Carceral geographers working on court spaces and spaces of trial and adjudication may wish to contribute to a UK government consultation on the proposed future strategy for HM Courts & Tribunals Service (HMCTS) in its approach to court and tribunal estate reform in England and Wales.

Consideration of court spaces has been a recent focus in research in carceral geography, wider human geography, and more generally. For example, Carolyn McKay‘s recent work has queried video links from prison, and the nature of court ‘appearances’. And Alex Jeffrey‘s recent piece, the first in his series of essays on Legal Geography in Progress in Human Geography is a case in point – in this paper, he examines the spatiality of court processes, connecting interdisciplinary work that has considered the physical processes of trials with geographical work that has deepened understandings of the substance and properties of the material world. The specific focus of the first discussion is the built materiality of courts, tracing the emergence of work on the nature of trial spaces, court architecture and the arrangement of courtrooms. Rather than a review of progress in an already-defined intellectual field, he brings together an interdisciplinary set of works with the aim of tracing the future pathways for work on the geography of trials.

In this paper, he urges a rethinking of ‘the nature of human presence within court spaces. Rather than the rigid imagination of ‘front’ and ‘back’ stage, a focus on materiality encourages a retheorization of the permeability of the building and the courtroom, enmeshed as bodies are within both visible and invisible technological, social and physical infrastructures.’ (Jeffrey 2017, 7)

There are further details of the ongoing consultation here.

According to the consultation website, the proposals detailed in the consultation document “have been identified following careful consideration of the ways in which we can improve the justice system. The [consultation] document sets these proposals within the wider context of the modernisation work underway in HMCTS and discusses our proposals for evaluating how our estate should change as a result. The consultation is aimed at court and tribunal users, legal professionals and bodies, the judiciary and magistracy and all other individuals with an interest in the court and tribunal estate in England and Wales.”

The consultation closes on 29 March 2018

Published in 1958, Gresham Sykes’ The Society of Captives has become regarded as the ‘cornerstone’ of prison sociology, with an unrivalled influence on the discipline. This conference marks the 60th anniversary of this classic text and seeks to critically assess the continued relevance of Sykes’ seminal work to contemporary penal scholarship. 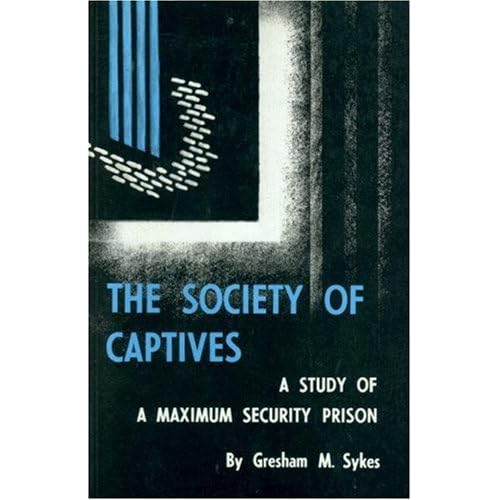 Taking place across two days – 27-28 June 2018, at College Court at the University of Leicester, this conference brings together many of the key thinkers on prison social systems, compliance and resistance, custodial regimes, dignity, and hyperincarceration, from the UK, US, Canada, South Africa, Australia, and Western and Northern Europe.

View the full programme for the conference here http://www.crim.cam.ac.uk/download/60th_Anniversary_of_Sykes_Conference.pdf Bookings can be made through the following page https://shop.le.ac.uk/product-catalogue/events-at-leicester/leicester-law-school/the-society-of-captives-today